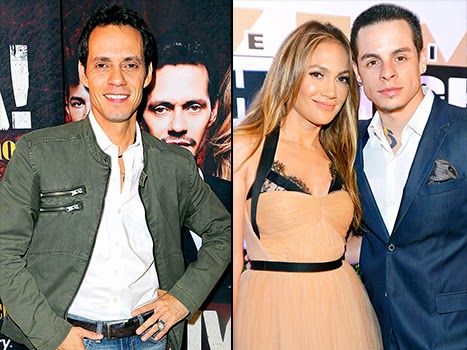 
Any friend of J.Lo's is a friend of her ex-husband's, too! Marc Anthony stopped by The Wendy Williams Show on Monday, Feb. 17, and revealed that not only is he on good terms with ex-wife Jennifer Lopez, but he's also pretty chummy with Lopez's boyfriend, Casper Smart.

"I like them young, too!" he joked of his wife's taste in younger men. "I'm not one to judge." Then, more seriously, he said that he actually has a close relationship with Smart, 26, whom Lopez, 44, has been dating for two years. (Anthony and the American Idol judge, parents to twins Max and Emme, 5, split in July 2011 after seven years of marriage.)

"It's great. As a matter of fact, we were texting back and forth two days ago," he said of the former backup dancer turned choreographer. "We're actually really, really good friends. From the very beginning."

"When you love someone and you care for someone...Jennifer and I -- I don't say it lightly -- we're great friends. You know, anybody that means anything to her means something to me," Anthony explained. "That's keeping it simple. Casper's a great guy. He's been great to my children. And I have nothing but respect for him, absolutely nothing but respect."

Anthony himself is newly single, having recently split from girlfriend Chloe Green after a year of dating. ("It is because of busy schedules," a source told Us of the exes.) But he's not giving up on love anytime soon.

Asked if he wants to get married again for a third time, the "You Sang to Me" singer answered with a resounding "yes." (Prior to marrying Lopez, he was wed to former Miss Universe Dayanara Torres, with whom he has two kids.)

"Yeah, I do, I do [want to get married]," Anthony told Williams. "I believe in relationships. I believe that God has blessed me in so many ways. Material things to but so far. Success goes but so far. But when your house is empty and you don't have someone to invest in, if you don't have a witness, it's almost worthless."