'I don't know if I'll marry Casper': Jennifer Lopez, 44, confesses she's not sure where relationship with toy boy, 26, is going

With three divorces behind her, Jennifer Lopez is understandably in a quandary over the question of marriage.

The 44-year-old American Idol judge has revealed she is uncertain when it comes to her future with boyfriend of two years, Casper Smart, 26.

When asked during the TCAs in Pasadena, California on Monday if she was thinking about walking down the aisle a fourth time, Jennifer couldn't answer definitively.

'I don't know. We'll see. I don't know,' the Bronx-born beauty said during a press conference promoting season 13 of American Idol, according to People.

Jennifer was quick to add: 'You know, I've always believed in that institution. I believe in it, but it is difficult. I've had my challenges, but at the same time I believe in love, and I think that is the main thing.'

Jennifer is making a dazzling return to the reality show after a year's absence, during which she travelled the globe on her solo world tour.

'That was such a transformative year for me in so many ways,' Jennifer said.

'I had just divorced, I went on tour with the kids, and I left Idol. All my security blankets were gone, and I was out there doing something I had never done before.'

She had her mother and Casper along but admitted that her beau helped out a lot by minding her five-year-old twins, Max and Emme, from her third marriage to Marc.

He was, Jennifer gushed, 'fantastic' with the children.

'I was surrounded by love and family,' the entertainer said. 'I really grew. My goal was not to come out the other side and just survive it but grow as a human being as well as an artist, and I felt I did. I learned a lot.'

Meanwhile, Jennifer is gearing up for the upcoming season of American Idol alongside fellow judges Keith Urban and Harry Connick Jr.

The pop star was seen giggling as she whispered something in the 46-year-old country singer's ear during a panel at the FOX Winter TCA Press Tour in Pasadena, California on Monday. 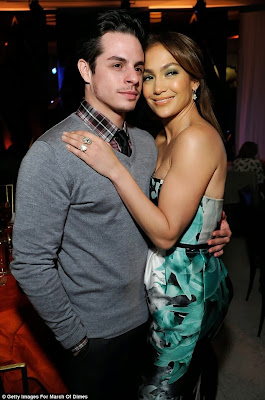