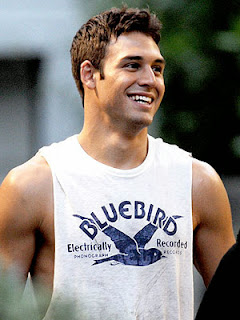 Step Up star Ryan Guzman is stepping into a new role. The former Calvin Klein model, 26, will play a teenager who has an affair with Jennifer Lopez in the upcoming thriller The Boy Next Door.

Guzman got his big break when he filled Channing Tatum's shoes as the latest lead in the Step Up franchise, and if Tatum's Hollywood trajectory is any indication, Guzman could soon be poised for stardom.

Here are five things to know about Hollywood's latest heartthrob.

1. He's an artist.
Guzman writes short stories and movie scripts. And when he's not scribbling away, he spends rest of his free time drawing. "I like expressing myself through art. [I draw] whatever comes to mind," he says. "I've got a couple of drawings of a female that I saw in my mind – a girl I just imagined...maybe it's my dream girl or something."

2. He likes a woman who appreciates a good laugh.
"She has to have more than beauty. That will fade," he says. "It's all about compatibility. Having a sense of humor and just playing off of each other well. I'm kind of talking to someone right now, but it's still developing."

4. He almost landed the coveted role of Christian Grey.
Guzman auditioned for 50 Shades of Grey, but his filming schedule for Step Up 5 conflicted with the movie's shooting schedule. "There was a lot of speculation and I feel honored for all of the fans to be so supportive and want me to succeed in something like that. I can't wait to see it."

5. Family keeps him grounded.
Despite his success as an actor and a model, Guzman hasn't forgotten where he came from. "The compliment that I like more than anything is when my family tells me I'm the same Ryan. I never want to become a celeb who forgets about anybody or has a big head about himself," says the Sacramento native, who adds that being home with his family for the holidays will be his ultimate gift. "I am asking for nothing this Christmas. Having some time off to enjoy the people I love the most will be my present."