Are American Idol Season 13 Judges Getting Along? Harry Connick, Jr. Spills on Working With Jennifer Lopez and Keith Urban 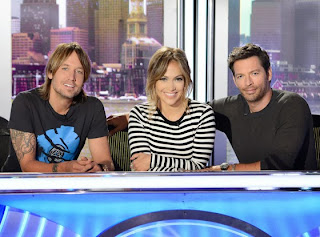 Forget about all that American Idol feuding between Mariah Carey and Nicki Minaj!

The upcoming season will have none of that, says new judge Harry Connick, Jr.

"It's three people who are having a friggin' ball," Connick tells me during a break from filming the sequel to his 2011 family film Dolphin Tale. "The show is really goofy, it's really serious and it's real fun. It's really heartfelt. It's everything you want Idol to be."

Just last month, Carey said during a radio interview that she "hated" her time with Idol because it was like going to work every day "in hell with Satan."

"It's the easiest gig in the world," Connick told me. "It really is. Look at what we do. We go and we get hair and makeup done, wear nice clothes and go sit and listen to singers and tell them that we think. Let's get real here."

Connick, who appeared twice on Idol as a mentor, called his move into a judge's chair "seamless."

"I really like them," he said of Lopez and Urban. "We'll finish shooting and we'll go have lunch and we all sit at the same table, talking about Jen's kids, my kids and Keith's kids."

Lopez and Urban have even talked to Connick's offspring (he has three daughters with wife Jill Goodacre) on the phone.

"Charlotte, my youngest, was at a sleepover and she asked, 'Please, Dad, can we talk to Jen?'" Connick said. "And Jen got on the phone and you just heard these deafening screams."

And there's already some talk of Connick, Lopez and Urban performing together on the show.

"It's kind of been hinted at," Connick said. "I'm game for anything. I would totally dig it. You're talking about three completely different singers. It would be great."